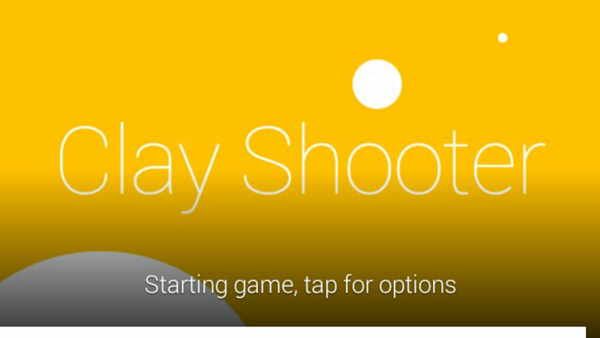 Google Glass has not yet been released to the public but Google is expanding the program slowly. But before it becomes available to the masses it needs to have a robust set of apps. To help kick start the community, the Glass team has published a set of games call Mini Games. They are simple games but demonstrate various concepts and controls that can be used on Glass. Some of them are fun and make a unique style game and control on Glass. Let’s jump into the details.

We have four sets of games called Tennis, Shape/Splitter, Balance, and Clay Shooter. All games use a various combination of voice, head and hand movement. Tennis is a simple head movement where you try to move a target circle to the incoming ball. Not that exciting but demonstrate the use of head movement as a game control. Nex we have balance which sounds exactly as you think. A stack of blocks gets dropped on your head and you virtually balance it with you head. Again showing finer subtle head movement in game control.

The other two games are a bit more fun and involve action movement. In clay shoot you use your voice “pull” command to release the clay, then use your head movement to target, then voice “bang” to shoot. Turns out to be the most fun game in my opinion. The last game, Shape/splitter, is a Fruit Ninja style game for glass. Objects are flying through the screen and you use your hand movement to slice them. It doesn’t work as well and seems to miss the finer control that you need to make the game effective. But nobody said Glass was perfect. To download the app, head over to your Glassware portal.

Overall, these are not ground breaking games in any sense but some of them can be fun to play. But they do demonstrate various cool new controls that can be used in games on Glass. It’s now up to the gaming and developer community to build on this and take it to the next level. Hopefully we will get some exciting and fun games on Glass soon enough. Let us know what you think about the Mini Games if you’ve had a chance to try it.