Binary Sudoku: A Twist on the Classic Sudoku Game

If you have ever played Sudoku then you know how addictive the game can be once you start playing. The traditional game involves solving a logic based number-placement puzzle. You start with a  9×9 grid and have to fill each row and column with the number 1-9. The 3×3 grids within the larger grid also need to contain the number 1-9. This makes for a great puzzle game that can be solved with simple logic. But if you have been playing Sudoku for a while then maybe you’re getting a little bored and looking for something new. Recently, XDA member Rick Boereback has put together a Binary Sudoku app in the Android Market for free. What is Binary Sudoku you ask? Not surprising it involves 1 and 0 as you expect and just as addictive as the original game. 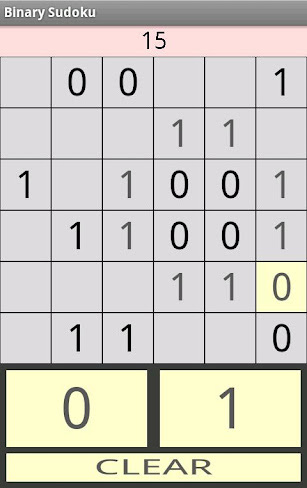 Binary Sudoku is similar to regular Sudoku expect for the major difference that you only deal with the number 1 and 0. It might seem that just 1 and 0 would make the game easy but it’s challenging as any other Sudoku game. Th rules are different and go as follows:

The game has 25  puzzles at 4 different levels of Easy, Normal, Hard, and Very Hard. Each level has puzzles sizes from 6×6 up to 14×14. I found the easy level to be very easy but I would suggest starting there just to get familiar with the game play and rules. The larger puzzle sizes add a challenge and once you get to the hard level it becomes very difficult.

If you exit during a puzzle it will be saved and can be played at a later time. The app supports Feint so you can compete and show off to your friends. Overall Binary Sudoku is a great simple app that is fun and challenging. It also works very well on the Kindle Fire and I would suggest sideloading the app if you are not rooted. Give Binary Sudoku a try and let us know how you like it.