Yesterday Mozilla updated their mobile Firefox browser in the Android Market with new tablet UI and features. I haven’t been using Firfox regularly on my Galaxy Tab 10.1 so I decided to take a look at it again. I will preface this by stating that I’ve been using the stock browser and Dolphin Pad for all my internet needs. I’m also a big fan of Google Chrome and exclusively use it on my laptop for a while now. But I tried to go into this with an open mind and give Firefox a chance despite the fact that they haven’t done a good job on the mobile browser. 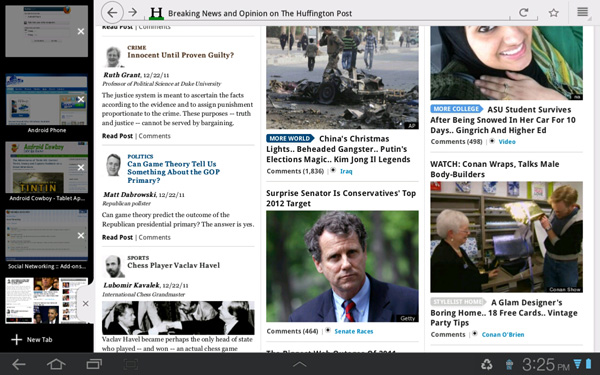 The new Firefox is improved over the previous version but I still found it lacking compared to even the stock browser. The speed is decent but nothing to boast about as pages take a while to load. Sometimes the screen flickers back and forth as the browser attempts to adjust the page to the width of the screen. It doesn’t support flash in any manner while all other browser can handle flash in multiple ways. Although flash is being phased out in favor of html 5, it’s a lacking feature compared to its competitors. I also hate seeing the black boxes on web pages with flash error messages. Now it’s not all bad so let’s talk about some of the positives.

Firefox does a great job with how it handles tabs which is very important on a tablet devices. The tabs are displayed as small thumbnails on the left side of the screen. You can minimize it by swiping to the left and bring it back by pressing the small tab button on the top-left-corner. All the tab operation were easy to perform and it was very simple to switch between tabs. The new Firefox also brings with it all the mobile Add-ons which gives a competitive advantage to other browsers. For example, the added search function for Amazon, Twitter and Wikipedia is a great feature not found on other mobile browsers. This is just one useful add-on as their are many more. You can also sync your mobile Firefox with your computer.

I think Firefox is finally moving in the right direction with their mobile browser but still a way to go. If you are a big fan of Mozilla and use their browser, then this new update might be enough for you on the tablet. I personally don’t think they have made enough improvements to make it my everyday browser yet. Let us know what you think about the new Firefox update. 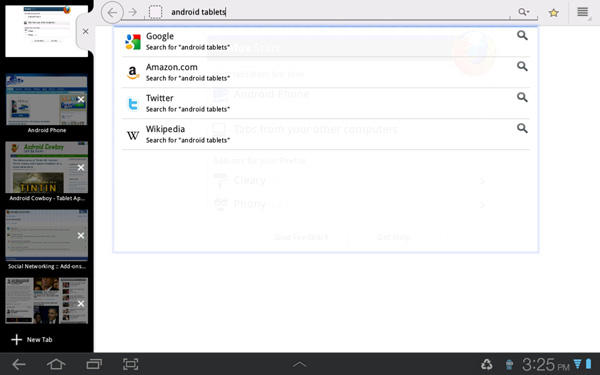