Normally we don’t cover tablet news that is not Android but today is the exception. Microsoft announced their anticipated Windows 8 tablet called Surface and initial impressions are very good. This could be bad news for Android specially the Google Nexus tablet that is expected to be announced soon at the Google conference. The iPad is still king of all tablets and Android has really struggled to get a real foothold in the market. The most successful tablet has to be the Kindle Fire which runs a custom user interface and moves away from Google services. Now the Windows Surface could continue that trend and further push down Android tablets. Although it’s still early and until we get pricing and hand-on it won’t be clear how successful the Surface will be in the crowded tablet market. Now for the details on the Windows Surface. 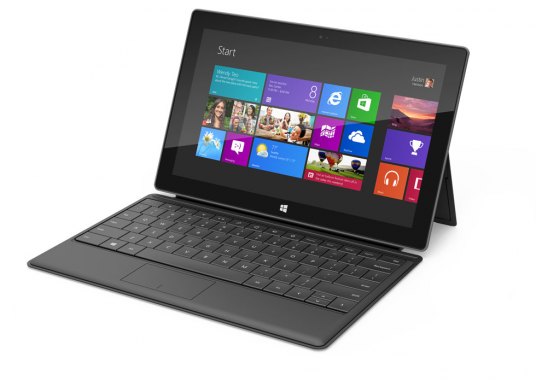 There are two version of the Surface announced which include and ARM based processor running Windows RT and an x86 with Windows 8 Pro. There are more than a few points that makes the Surface tablet special right from the start.  The most noticeable feature is the Surface includes a kickstand. The kickstand is built of the same material as the tablet and built into the body. The Surface also comes with a magnetic cover at 3mm thick that doubles as a full multitouch keyboard and trackpad. The Windows RT uses a Nivida Tegra 3 processor at a 9.3 mm and 676 grams. The Windows Pro version is a bit thicker at 13.5 mm and weighing at 903 grams. The Pro version also comes with a digital pen for accurate note taking and annotations. Other features include a Gorilla Glass 600 dpi ClearType HD display with microSD card slot and USB connectivity.

Will all this be enough to push customers towards Windows 8 tablets or will it flop. I think Microsoft has done a fantastic job of combing the tablet and laptop model in a unique and stylish design. It’s clear that they have put a lot of thought and design behind the Surface. I have no doubt that customers want that combination and I’m one of those people. Why pay $400-500 for a tablet and around a $1000 for a laptop if one device can give you both at a cheaper price without compromise. It may not be for all but many will embrace this model. Now we’ll just have to wait and see what Google announced with the Nexus tablet and how it all shakes out. No matter which way you go, it’s a win for consumer with lots of choices. Full spec are below.