Today Samsung had a press event where they announced a host of new devices which included new cameras, phones, and tablets. But the devices that was the most intriguing for me was the ATIV Q tablet. So what makes this tablet different and doesn’t Samsung already have a huge lineup of tablets already? Yes, but this one is special in that it combines both a Windows 8 and Android software in a sleek new device. Intrigued yet! Let’s check out the details. 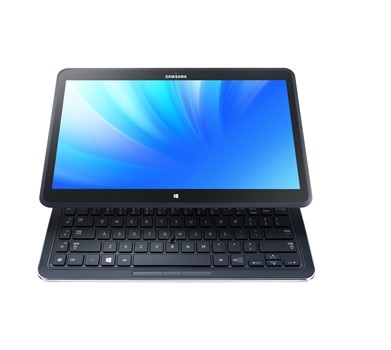 No doubt that tablets are popular but one major drawback is that they can never really replace our notebook entirely. You don’t have a keyboard in some cases and most importantly there are lots of software that can’t be run on Android. But what if you could seamlessly have both Android and Windows in one tablet. Then just maybe you have the best of both world in once device. That’s what the ATIV Q tablet attempts to do and it looks very impressive.

The ATIV Q has an Intel Core i5 chipset with a 13 inch QHD+ screen that has a resolution of 3200 x 1800 at 275 ppi. It’s very thin at 13.99 mm and only weights 2.8 lbs. It comes with an attached keyboard that lets you have 4 viewing angles. You can close it over the keyboard for a full tablet experience. You can angle the screen for a notebook and typing experience. There is also a floating mode and a stand mode for viewing.

But what makes the tablet special is the that it has both Windows 8 and Android and switching is a breeze. There is not reboot or anything required to go from Windows to Android or vice versa. You can simply tap an icon to switch to Android and back. You can even place Android app shortcuts on the Windows tiles for direct access. Both systems also share the file system for pictures and documents.

Other added benefit is the addition of S Pen for true notetaking. The tablet also has another neat feature called SideSync. This feature puts your phone’s screen on your tablet. You can respond to text on your tablet, view photos and videos, and more. Definitely lots of features packed in this tablet. Prices and availability are yet to be announced.

I’m personally very excited about a tablet of this type and specially since the switch between Windows 8 and Android is so easy. This could help me get rid of all the tablets around the house and merge it into one very productive tablet. I hope more manufacturers try to go in this direction as I think this will sell very well and be appealing to consumers. Let us know what you think about the ATIV Q tablet. Does it interest you and will you be buying one.