Tohsiba may have been one of the earliest manufacturers to release an Android tablet couple of years ago but that hasn’t helped them to be popular. Although Toshiba tablets have not been successful it’s certainly not due to the lack of trying. Toshiba has been consistently releasing tablets every year with no traction. That might change now with the new Excite tablets just announced.

Toshiba has announced a new line of Excite tablets being the Pure, Pro, and Write. They run the whole price range from the $299 Excite Pure to the $599 Excite Write. The Pure is a low budget 10-inch tablet running Android 4.2 with a 1280 x 800 screen and Tegra 3 processor. Although the specs aren’t off the charts, it’s priced well for a 10-inch device and maybe one of the cheapest in that size.

The Excite Pro jumps up the specs and competes with the likes of the Nexus 10 and iPad. It’s a 10-inch tablet with a 2560 x 1600 resolution screen, Tegra 4 processor, camera, micro HDMI, Micro-USB, and a microSD card. In the hardware department it’s as high-end as you can get a tablet these days but it will cost you $499. If you are looking for a budget option then this will not be it. 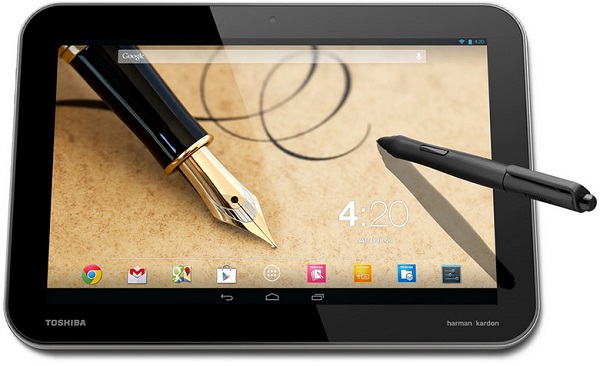 The most interesting tablet is the Excite Write and as the name suggests it has writing on the mind. This tablet is identical to the Excite Pro in regards to specs but has the added Wacom digitizer inside. The tablet comes with a Wacom stylus that senses 1,024 degrees of writing pressure. This is a direct and maybe better competitor the the Galaxy Note 10.1 tablet. The Wacom stylus is much better than the plastic stylus that comes with the Note tablet. But this tablet is pretty expensive at $599 which makes it $100 more than the Note 10.1 itself. These days the trend is towards cheaper budget tablets so we’ll have to see how the Excite Write does in the market.

These are probably Toshiba’s best tablets so far as they have tried to hit all price ranges and consumer interests. But will it be enough to kick start the Toshiba tablet sales and make a dent into the Samsung machine. Maybe people are getting saturated with Samsung and this might just be the right time. Time will tell. Let us know what you think about the new Toshiba tablets in the comment section.