The Google Nexus 10 is Official and It’s Very Awesome 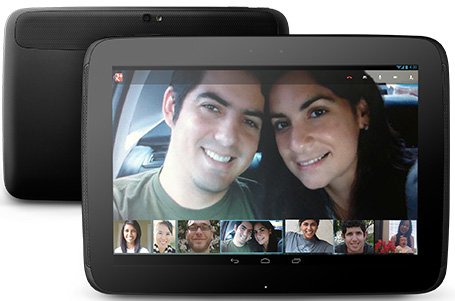 Google decide to do everyone a favor and instead of rescheduling their New York city event, they announced their new products via their official blog. As expected Google unveiled their new LG Nexus 4 phone, 32 GB Nexus 7, and the Nexus 10 tablet. The Nexus 10 is definitely a great device and one to finally rival the iPad and in some eyes even better. First the screen has a whopping 2560 x 1600 resolution with 300 ppi which is even higher than the new iPad 4 that has 264 ppi. It also comes with 2GB of ram and the brand new Samsung Exynos 5 processor with Mali T604 GPU. This is literally the best hardware tablet you can buy hands down with no exception. The great news is that it’s only $399 for the 16GB version which is $100 less than the iPad 4. If you are an Android fan then you no longer have to be jealous of the iPad any longer. But the Nexus 10 also comes with some great software features as well.

On the Nexus 10 you get the newest Android 4.2 Jelly Bean which has some handy new updates. First the Google Now app has been greatly updated with  enhanced features and a host of new cards. I have found Google Now to be very useful and it’s one of Google’s best products moving forward. Another great addition is support for multi-users logins. Tablets are definitely devices that are used by multiple people in the house. Now each person can login using their own Google account and everything is unique to them. A much-needed feature that has been asked for by consumers and Google is the first to incorporate it. There’s also a new panoramic photo app called photo sphere and you also get wireless streaming to HDTV using wireless HDMI adapter. Tons of new features to play with in a state of the line tablet. Full specs are below.

Well, the news doesn’t end there as we also get a 32GB nexus 7 tablet with and without 3G. The price for the WiFi 32GB Nexus 7 is $249 while the 3G version is $299. The price of the 16GB Nexus 7 has been dropped to $199 and the 8GB is no longer available. So now you get double the storage for $50 discount as compared to before. All specs of the 32GB version is the same as previous models. All Nexus 7 models are running Android 4.1 but will be upgraded to Android 4.2 in the near future.  Enjoy your new lineup of Nexus devices by Google.