After a small delay Dead Trigger from Madfinger Games has finally arrived in the Google Play Store. Madfinger Games is the maker of Shadowgun which was and is one of the best third-person shooter games in the Play Store. They set the trend for high quality shooter games way before Modern Combat 3 and Mass Effect. This is their first foray into first-person shooter (FPS) zombie games. There may be too many zombie games in the Play Store but this one is different and a must have game. Let’s get into the bloody and glory details.

First, before we began I want to be clear that although the game is only 99 cents this a freemium game. I’m not a fan of this model but it seems like it’s here to stay for the near future. This seems to work for the developers and in the end they deserve to get paid for their hard work. If they don’t get money then we won’t get great games so that’s the way it goes. But the good news is that for another $6 you can get all the points and money you need to do well in the game. That puts it inline with other high quality games in the Play Store. I would also add that this game is awesome and well worth every dollar. 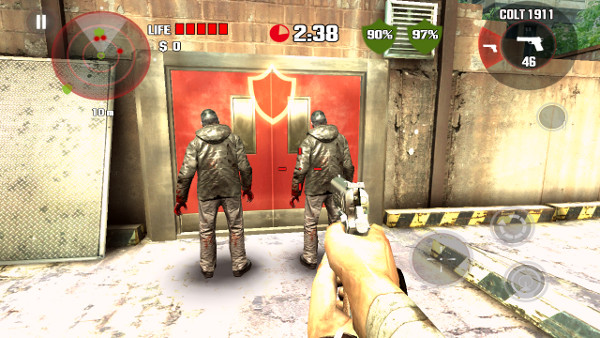 Dead Trigger definitely does not hold anything back when it comes to graphics. In my opinion this is the best graphics game that you can get in the Play Store. The game features full 3D characters and environments with great detail to the surrounding. The zombies are life-like (pun intended) from the wrinkles in their hazmat suits to their bloody face. The game and zombies are very fluid with no lag and it just feels natural. Those that have Tegra 3 device get some bonus features like ragdoll effects and water simulation. Both versions are in the same game so no separate app for Tegra 3 Devices. This cuts down on the app confusion and hopefully a model for others to follow. 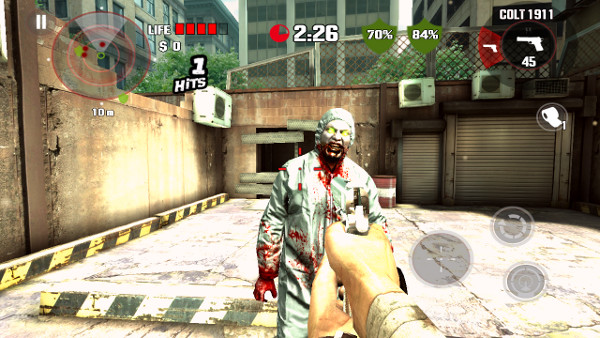 The controls are much improved in this game compared to Shadowgun and other games. It’s very fluid with no lags and I was very happy playing the game with no frustration. You can control the movement of the player up-down-left-right by swiping on the left side of the screen. On the right side you can move the point of view up-down with swipe. There are three simple button for shoot, sniper mode, and reload. The position of the buttons can be customized and move around to fit to your liking. You also have the option of using a gamepad controller. 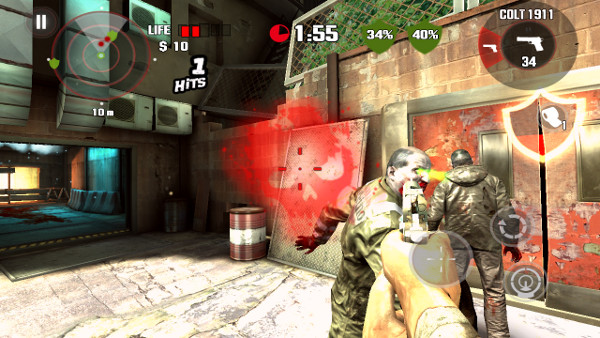 In the end all zombies game come down to killing zombies but Dead Trigger adds some more sophistication to their game. This is a mission based game rather than simple level after level of zombie killing which can get boring. Each mission goes from 5-15 minutes which makes it nice to play a quick game if you don’t have hours dedicated to playing. Each mission is a bit different and brings its own set of challenges. In some mission you have to hold your ground for a certain time and not let zombies get past you. In another case your are required to clear an area of all zombies. Things can get more complicated where you need to protect two different areas from zombie attack which forces you to go between places. Other mission involve finding a certain item or moving an item from one location to another. I’m personally a fan of the mission style game which keeps it interesting in my opinion. 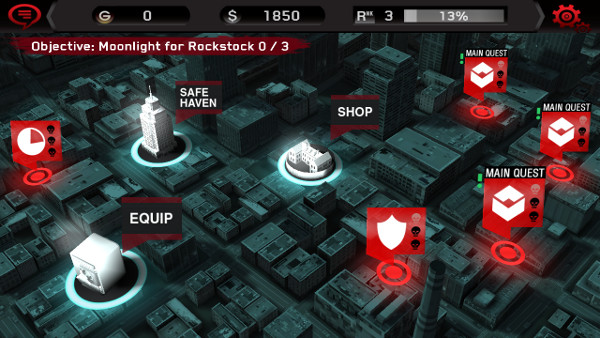 As far as killing zombies you have a variety of weapons that you can obtain with points or money. If you aim at the body it usually takes a few shots to kill the zombie suckers. But if you are really good then you know to aim for the head and take them out in one shot. Trust me blowing off zombie heads is just awesome as their body just crumbles to the floor. There is also a sniper mode which you can use to take our your enemy before they get too close. But if the zombies do get too close then you enter hand combat mode. Here you will have to poke their eyes out and do anything to get them off you. This is accomplished by pressing certain rings that appear in different location. If you’re successful they usually bite your hands and back off. Further down the road you have the opportunity to rip some limbs off if you are lucky. 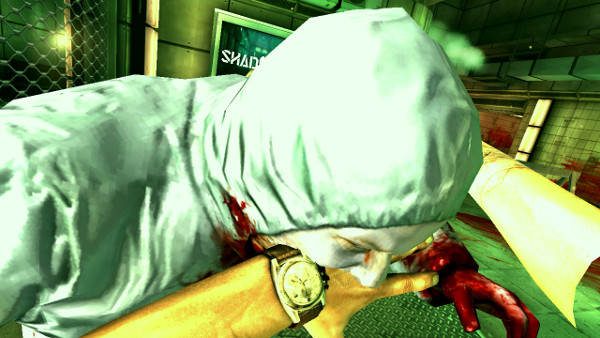 I’m a big fan of Madfinger Games and I believe they really put a great effort in Dead Trigger. I was excited before the game came out and I’m just as excited playing the game. This is by far the best FPS and zombie game that I have played. I was also happy that the file size of the game is around 100 mb which is small compared to other games of this type that run from 500 and higher. Even if you don’t want to spend a lot of money with in-app purchases the game is still well worth the 99 cents. Again it’s also good to support the developers so they make more games. And just to be clear I have not been paid for this review. I just think it’s a great game and I think you will too. Enjoy killing zombies. 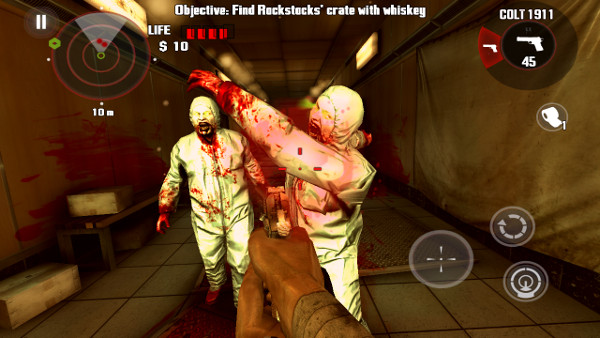 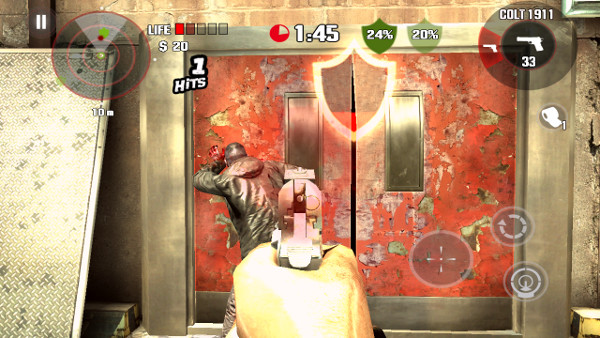