The Kindle Fire is a great device with access to thousands of apps in the Amazon Appstore. But if you own a Kindle Fire then you know that the official social apps like Facebook and Twitter are not available. Those apps are in the Amazon Appstore but they are simply place holders as a link to the mobile site. That’s not an app and it’s shameful that they would even masquerade as one.

Given that social connections rule the day, it’s a glaring omission on the Kindle Fire not to have the official Facebook and Twitter app. But this week Twitter update their app with support for Kindle Fire and ICS tablets. Now you can finally get access to the official twitter app on the Kindle Fire with full functionality as a real app. Now if only Facebook could stop worrying about their IPO and upgrade their app to support Kindle Fire. Yeah Zuckerberg, how hard can it be to get your big team to make an app update.

The Twitter app on the Kindle Fire is very consistent with the new look of Twitter. The UI is very similar to the web version with tabs for Home, Connect, Discover, and Me. I was happy to find that the app performed fast with no lags between tabs or viewing tweets. Most of the standard functionality of Twitter are available including search and profile viewing. Overall the app performs well and looks good on the Kindle Fire screen. 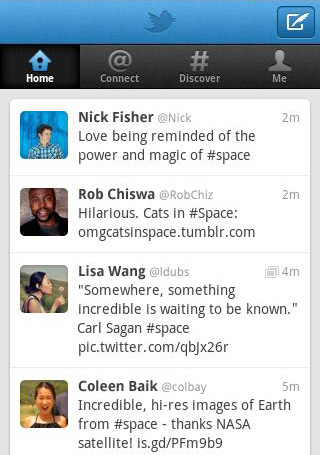