Blood & Glory: Battle in the Arena and Become a Champion Gladiator

One of my favorite shows on TV is Spartacus: Blood and Sand which is aptly titled. It’s about Spartacus fighting in the gladiator arena and basically involves fighting, blood, sex and politics. Despite all the gory blood it’s a well done show with sophisticated plot and very entertaining. In general, I love the gladiator genre and that’s why I was excited to review Blood & Glory. This game lets you live out your fantasy as a gladiator fighting in the arena to the death in front of blood-thirsty crowds. But this game is no cake walk so be prepared to bring it all to survive in the arena and claim your glory as a champion gladiator. 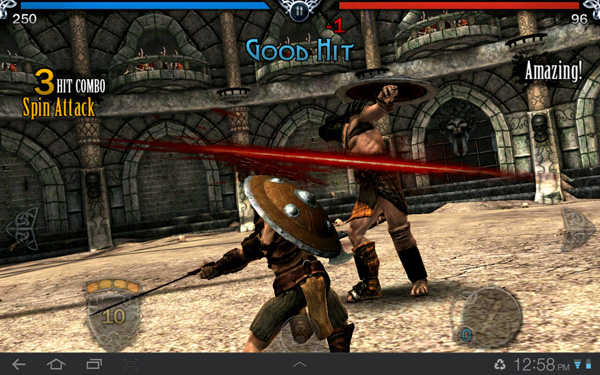 I played the NR version of the game because I personally enjoy blood when I slash my opponents. Also that was the only version I could get to work on my Galaxy Tab 10.1 as the no blood version constantly crashed during download. But the NR version worked fine and I had no issues or crashes during game play. Now on to the good stuff.

Blood & Glory has great graphics with realistic fighting and action. The first thing you notice when you play the game is that all your opponents are bigger then you. But that’s okay because with skill and some good armor you can take them down. The game is in third-person style and you can’t move your character around the arena. You are stationary with options to attack, dodge, block and parry. Some users do complain about the controls but I found that it was easy to use and designed well for the game. 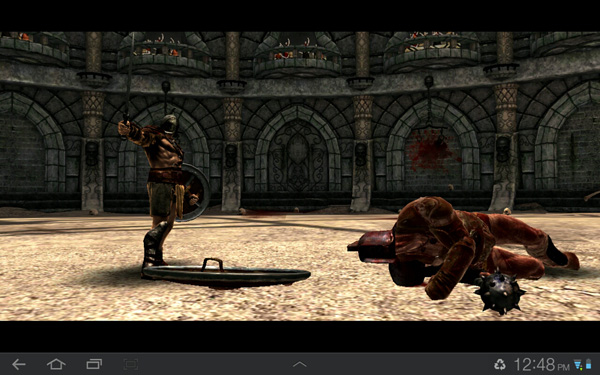 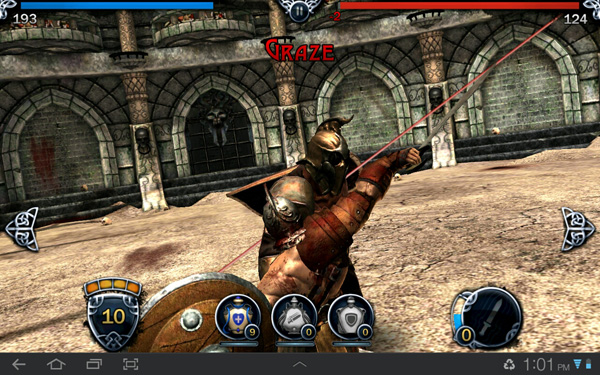 You can attack by swiping across the screen and there are 3 combos that you can use. But this game is more about dodging, parry and block then just hack and attack. You can dodge by pressing either the button on the left or right side of the screen and it needs to correctly correspond with the attack coming from the same side. You can block with your shield but each attack will take shield points based on the type of attack. You begin with only 10 shield points but you can upgrade with better armor or potions. Parry is the best way to fight but also the hardest to master. You have to swipe the screen exactly in the opposite direction of the incoming attack with correct timing. If you master parry then you will be well on your way to becoming a champion gladiator. Also during the game play your view-point will switch which adds another challenge to dodging and parrying. 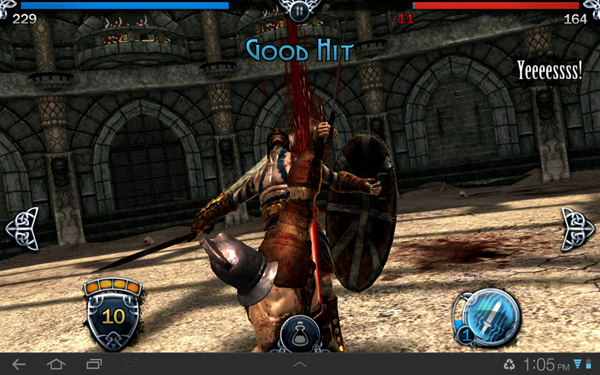 The game tends to be easy at the beginning but becomes quickly difficult. At first, you wait for the opponent to attack then either dodge, parry or block which then gives you a chance to attack back. As you move to more difficult opponents you’ll have to evade two to three attacks in a row before being able to strike back. The attacks become more difficult to predict and harder to avoid. Once you enter a tournament you need to win five fights to become victorious. Your health meter carries over from fight to fight and doesn’t regenerate. You have potions during the game to regain health, attack and shield to help win the match. I found that using health potions was the biggest help in winning matches. But your potions carry from one tournament to the other so if you use it all then that’s it. As you gain points you can upgrade and buy more equipment and potions. 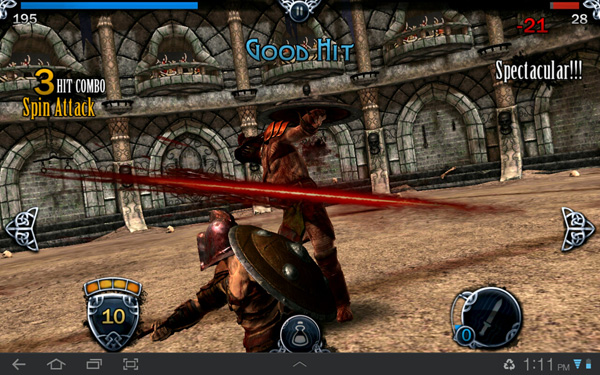 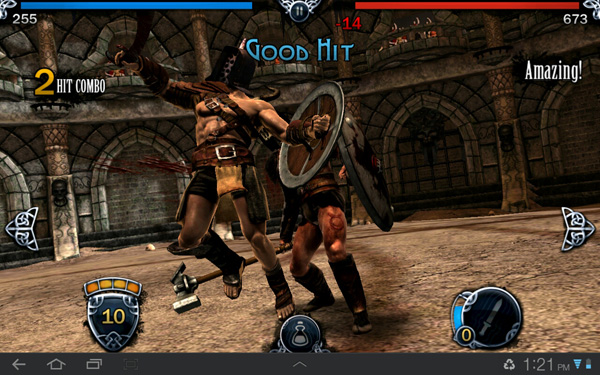 Although the game is free you might have to spend some money to buy gold coins. It seems very difficult to proceed very far in the game without having to upgrade your equipment which will require some cash. Just winning tournaments doesn’t seem to provide enough points to upgrade significantly. That’s probably the biggest issue with the game and one of the biggest complaints by reviewers. It would be much better if you could just buy the game outright then have to spend so money on equipment. Otherwise the game is really fun with great graphics and excellent game play.

This is one of the games that I personally enjoyed playing on the tablet with very smooth game play. Despite the issue with having to use money to upgrade equipment the game is fun and challenging to play. You can always play previous tournaments that you have won to gain points and master your skills. If you put in the time, you can master all the moves and become an expert gladiator. Download Blood & Glory and find out if you have what it takes to become a gladiator champion.

Download NR version from the Android Market. The no blood version link. 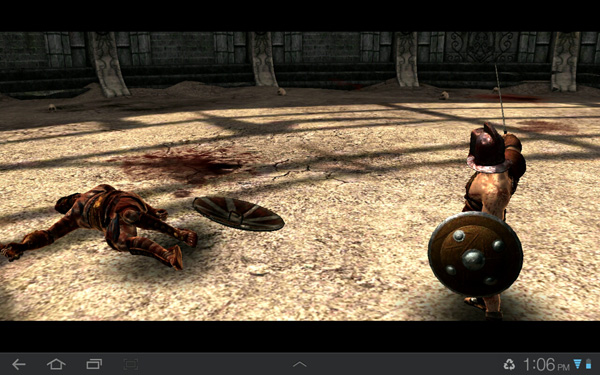 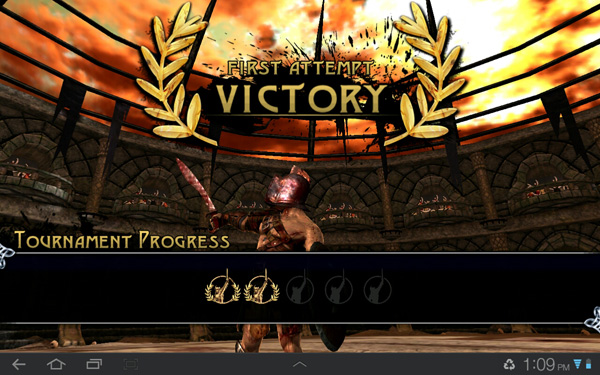 Nov 28, 2011Arash Soheili
Tabr: Multiple Apps in a Single Widget with TabsMemory Trainer: A Game to Exercise Your Brain on the Kindle Fire